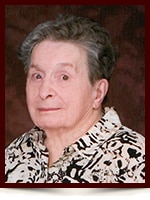 Dorothy`s smile and sense of humor will be missed but not forgotten. May she rest in peace.