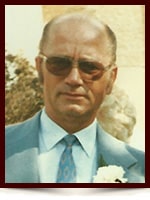 On January 01, 2017 Egon Hans Alsfeld of Edmonton passed away peacefully at the age of 81. He will be forever loved and missed by his wife Gertraud Alsfeld. His daughters Elona Visscher, Veronica Prefontaine (Jamie) and his sons Norbert (Janis) and Frank (Darlene). He will also be missed by his eleven grandchildren, David, Nicole (Jesse), Amanda (Daniel), Desiree (James), Stephanie (Derek), Jessica, Christopher, Ben (Courtney), Lisa, Adam, Mackenzie, and his nine great grandchildren Kayleb, Brady, Tyson, Aubree, Landin, Lilly, Nolan, Cailyn, and Alexis.
Family in Germany Horst (Hanelore), Willi, Manuela and family, Gabi and family, Robert and family, as well as the Alsfeld families.

Egon was born in Kassel, Germany on August 04, 1935. He was one of ten brothers and sisters. In 1953 he met Gertraud, and married in 1954. They had three children before venturing to Canada, where they were then blessed with one more son.

A special thank you to his wife Gertraud, daughter Elona and his grandson David for their care and support during his final years. In keeping with Egon’s wishes cremation has taken place.

If you wish to donate in memory of Egon donations may be made to the Canadian Cancer Society.