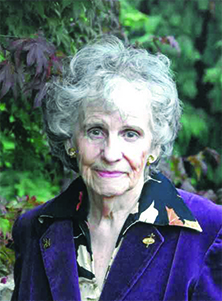 It is with great sadness and much love that we announce the passing of our mother, grandma and great grandma on September 4, 2021, at the age of 91.

Esther was born to Erland and Iva Lindquist on April 5, 1930, in Jarrow Alberta.  She grew up near Killam, Alberta then on to Camrose and then Edmonton in her early 20’s where she lived for the rest of her life.

When Esther was 12 she got an accordion from her dad as a gift.  She learned to play by ear (not from notes).  She was soon playing for town hall dances at an early age.  She would play at family gatherings with other family members who also played the guitar and keyboard.

She sold Tupperware for many years and was very involved with Bell Key Sales.

Esther loved the Lord and in her 50’s played the piano at church, up until her early 80’s.  She also loved her Blue Jays baseball team and the Edmonton Elks football team.

We would like to express our gratitude to the staff at Sheppard’s Care Kensington Village, 2nd floor long term care who looked after mom for the past six months.

Due to the current pandemic, a Celebration of Life will be held at a later date with family.

In lieu of flowers, donations can be made to the Canadian Red Cross, or the charity of one’s choice.