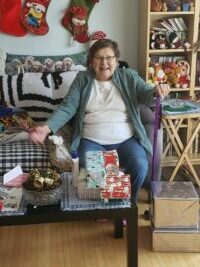 On June 1, 1943, Frances was born to John and Jessie Jancys in Wetaskiwin. Fran spent her youngest years in Drumheller before moving to their farm near Millet when she was about 6 years old. She attended school in West Liberty, Pipestone and graduated in Leduc. She moved to Edmonton and became a telephone operator with AGT. Here, she met Orest, and they married on May 8th, 1966, and on May 9, 1974, her son Robert was born. Orest passed on February 19th, 1986. While raising Robert, she worked for Plants West where she cared for and tended to plants for different businesses and later on she worked for Stats Canada from which she retired in the year 2000.

Fran was a very caring person towards people, plants, and animals. She could take fading plants from a greenhouse, nurture them back to health, and incorporate them into her gardens. She won several Gardens In Bloom awards for her creative gardening efforts. Fran also cared for many animals: budgies, fish, cats and dogs. Horses were her favourite. She supported many organizations like WWF.

To the people in her life, Fran was a good friend. She provided care, comfort, support, and love to all. Fran was always there with a compassionate ear, joyous laughter, or a shoulder for many to cry on. Her nieces and nephews along with their families felt that she was their second Mom/Grandma after her sister passed. She was was generous with donations, casseroles, wiener roasts, flowers and many cards for all occasions. She let every person know that they were important and worthy. It was rare to have a conversation with her and not have a good laugh.

You couldn't know Fran without knowing her love of books. Every trip to Costco brought, at the very least, three books home. To share this love with the children in her life, she bought them wildlife magazine subscriptions to capture their imagination with the world around them and to develop a love for reading.

Over time, she developed heart conditions and diabetes. In 2014, she had a major heart attack and was given a 5 year prognosis. She blessed us with 6 1/2 years more. She lived her days with gratitude and joy. In her final days she had a persistent UTI and when she was admitted to the U of A Hospital, it was discovered that she had pneumonia and that went septic. On March 8, 2021, her body went into systemic organ failure. She died peacefully, with dignity and grace, as Robert held her hand.