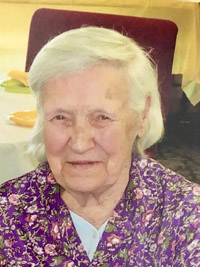 We sadly announce the passing of our precious mother and grandmother Halina Gruzin on September 18, 2020. Halina was predeceased by her devoted husband Pawel by 13 years. She leaves behind her three children Anatole (Patti), Eugene (Bernadette) and Maria (Chuck), seven grandchildren and six great-grandchildren.

Born in Ukraine, she survived the Holodomor, the second world war and finally came to Canada via Belgium with Pawel and three children in 1951. They first lived and worked in Quebec and then retired in Alberta to be closer to family.

Halina was a brave, strong and very talented and brilliant woman. She spoke five languages. She stayed abreast of current events by reading the English daily paper and the Ukrainian and Polish periodicals.

“what can do, must accept” was her philosophy and though that helped her overcome many challenges in her lifetime, she was not a pushover.

Family, friends and neighbours will miss her wisdom, her ethics, her resiliency and her humour. Rest in peace dear Mother.

We would like to thank the staff of the Dr. Gerald Zetter Care Centre for the care and respect they gave Halina.

Because of Covid, a Celebration of Life will be held at a later date.