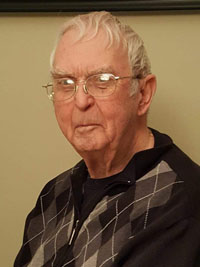 It is with deep sorrow that we announce the passing of Harold Charles (Brownie) Brown on Saturday, November 28, 2020, at the age of 84 years. He will be lovingly remembered by his wife of 61 years, Phyllis, daughter Sandra (Ken) Ausmus, sons Dave (Lisa) Brown, Neil (Barb) Brown, seven grandchildren and many extended close family and friends.

Harold was predeceased by his parents, Hollis and Melvina, brother, Spike (Rudolph), his sister-in-law, Betty, and brother-in-law, Alvin.

Harold was the second son of Dr. Hollis and Melvina Brown. He was born and raised in Edmonton, grew up in the Spruce Avenue area and attended Victoria High School. He met and married the love of his life, Phyllis. They married and were blessed with three beautiful children.

Harold was a big family man and was actively involved with his wife or children's activities. Whether he was at a hockey rink, dance competition, ball diamond, or craft show, he was always there supporting.

Harold was a painter by trade, working at NAIT for many years and then as a paint inspector for the Government of Alberta. In his youth, he enjoyed curling, hunting and camping with his family. He spent many hours volunteering in the Delwood community where they lived for 55 years, coaching hockey, calling BINGO, running the talent shows or working the rink shack store. After retirement, Harold and his wife were able to spend many winters travelling south to get away from the Edmonton cold.

Harold had a zest for life. He thoroughly enjoyed attending the many family gatherings where he would take great pleasure in "skunking" someone in crib. He always had a joke to tell and loved to make people laugh. He will be missed by many and his memories will be cherished forever in hour hearts. Rest in Peace Harold.

In lieu of flowers, donations can be made in memory of Harold to the Arthritis Society.