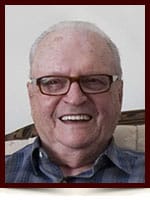 HAROLD WALTON FLETCHER passed away peacefully on February 10, 2014 at the grand age of 91 years, after a lengthy illness. Harold always took pride in doing the best job; from his years in the Navy, to his long career with Woodward's. He will forever be remembered as an avid gardener, sports enthusiast and handyman.

Harold was predeceased by his loving wife of 64 years, Margaret; beloved daughter Janice; parents Cyril and Ellen Fletcher; sisters Dot and Marj; and brothers George and Bill. Harold had requested that no funeral service be held for him, so instead we ask that those who knew him remember him in their hearts, thoughts and prayers. In lieu of flowers, donations may be made to the Alberta Heart and Stroke Foundation.