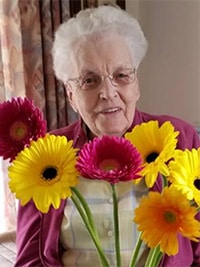 It is with heavy hearts that the family of Ida May Bowler announce her passing on March 10, 2018 at the age of 92 in Edmonton Alberta. She is survived by her children: Donna (Mal) Schofield, Shirley Logan, Elaine (John) Thiessen, James (Cheyenne) Bowler; twelve Grandchildren, eighteen Great-Grandchildren and eight Great-Great Grandchildren.

Ida was born in High River Alberta, to Rosina (nee Hobbs) and James Cleveland. She was raised in Gunn Alberta, joined the Army at 18 and served in Canada for 3 years during World War II. Ida worked throughout her life which includes 30 years with Don Wheaton Chev/Olds. She lived in the Parkallen community for over 60 years.

Ida loved her family, spending time with friends, and gardening. She will be remembered for her loving smile, great sense of humour and cooking specialities. i.e. Fried chicken, Jello Ice Cream

Per Ida's request there is no service with a family internment to take place at a later date. In lieu of flowers, donations may be made to the charity of your choice.