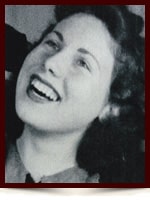 On October 4, 2012 Ilde Savioli of Edmonton, formerly of Arezzo, Tuscany, Italy passed away peacefully at the age of 88 years.

Left to cherish her memory are her two loving daughters, Mirella (Robert) Gibeau and Loretta (Bruce) Belliveau; four grandchildren: Vanessa, Alex, Brennan and Jarrett; sister-in-law Elena Roncucci as well as other relatives and many dear friends. She was predeceased by her husband Lorenzo in 1984.

The last surviving child of Narcissa and Emilio Roncucci has passed away. Ilde had a love of opera, film and all things beautiful. She was born and raised near Florence, Italy until she emigrated to Canada at the age of thirty two.