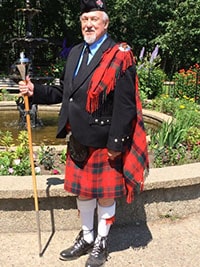 Born and raised in Calgary, John developed a love of railroads and steam engines early in life. He worked summers on the railway from the age of 15. In 1952, he and lifelong best friend Ray Matthews quit school and officially began work for CP Rail, where John worked his way up the ranks to become an engineer. He moved to CN in 1953 but was soon laid off. As he could join the Armed Forces and retain seniority on the railroad, he decided to join the Air Force in 1954.

John attended officer training school in London ON then transferred to flight training school Moose Jaw Squadron 4. Moose Jaw was where he met his future bride (Mary)Joan Berry. He and Joan got married in the spring of 1955.

After discharge from the Air Force, John went back to CN in Calgary, where he worked a second job as a taxi driver. They moved to Kamloops but he was frequently laid off. Spring 56 John learned he could hold in Jasper, so he and Joan moved there.

They welcomed a daughter Diane in 1957, and a son Scott in 1962. They lived in Jasper until 1975, when they moved to Edmonton. John worked Calder yards for two years until he joined Edmonton Transit in 1977 as its first LRT Supervisor, where he was instrumental in helping set up the operations systems and assisting in the writing of the rule book for the new LRT. John continued working in various supervisory roles for LRT until 1993 when he retired.

John and Joan divorced in 1990, and he settled down into a partnership with Lois Grigg until her passing in 2016.

Throughout his life, John was a leader, doing a stint as the representative of his local Brotherhood of Locomotive engineers, and a couple terms on the Jasper School Board. He was part of the group that spearheaded a successful campaign against the federal government to allow 99-year Crown leases on land for homeowners in Jasper National Park. He started the Jasper Highland Pipe Band at the age of 30, and played in several Edmonton pipe bands. In 2002 as Pipe Major of Big Rock Grade 4 band he led the band to a seventh place finish in the World Pipe Band Championships in Glasgow at the age of 69, piping alongside his daughter Diane with grandson Korey playing bass drum, and son Scott playing with the Gr 3 band.

In addition to piping, John had drum major skills and won a number of drum major competitions. He led many massed bands at Highland games as Drum Major, and was renowned for his booming voice and for making sure to keep the beat through Amazing Grace by raising his mace for all to see. He continued to be an active leader in the Alberta pipe band scene until he hung up his pipes at the age of 81.

If that wasn’t enough to keep him busy, John also an avid model railroader and a sailor. He was instrumental in starting a model railroad club with a few acquaintances, which continues to be carried on by some very passionate members. And he had several sailboats in his lifetime, the first of which he built himself.

John was an honourable, loyal and supportive dad, grandfather, and great grandfather, who loved his family and friends with a gentle, kind, encouraging manner. His love and joy shone through his twinkling blue eyes and he was always up for a hug or three.

John was passionate about history, railroads and bagpipes, and was a gifted storyteller, leaving people astonished with his knowledge on a very wide variety of topics. He had a phenomenal memory and his sharp intellect and sense of humour remained engaged until the very end.

He will be greatly missed but well remembered by the many whose lives he touched and will live on in our hearts and our many wonderful memories.

Our thanks to Dr. Eric Estey and team at the Kipnes Centre, Dr. David Tran and Megan at Lakeside Clinic, and especially homecare aide Lillian.

There will be no service at this time due to the pandemic. Interment of ashes will be done at a later date at Bowden Cemetery beside his granddad.

In lieu of flowers, donations may be made to the Canadian Cancer Society, the SPCA, the Dianne and Irving Kipnes Urology Centre, the Alberta Society of Pipers and Drummers, or charity of your choice.

Please share your stories and memories of John in the comments section. The family would love to hear them.

Will the Lights be White

Oft when I feel the engine swerve
Over strange rails we fair,
I strain my eyes around the curve
For what awaits me there.
When swift and free she carries me
Through the yards unknown at night,
I look along the line to see
That all the lamps are white.
The blue light marks the crippled car,
The green light signals slow.
The red light is the danger light,
The white light, let her go.
Again, the open field we roam,
And when the night is fair
I look up at the starry dome
And wonder what’s up there.
For who can speak for those who dwell
Beyond that curvy sky.
No man has ever lived to tell
Just what it means to die.
Swift toward life’s terminal I Trend,
The run seems short tonight.
God only knows what’s at the end
I hope the lights are white.