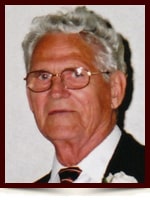 On April 6, 2010 Joseph Kudrynesky of Edmonton passed away at the age of 83 years. Joe is survived by his children: Leonard (Leanne), Jeffrey, Carey, Wade, Shirley (Al) Cockram, their mother Ann as well as numerous nieces, nephews and grandchildren. He was predeceased by his parents Anna and George, brother Wasyl and sisters Olga and Paulina. Joe was born in Poland and immigrated to Canada on July 27, 1929 with his Mother (Anna), brother (Wasyl) and three sisters (Elsie, Olga and Paulina). Joe was well known for his love of Thoroughbred race horses which he owned and trained for more than 20 years. The family would like to thank the staff at the Alberta Hospital unit 12-2B for the special care they took of their father.