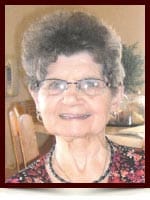 On December 17, 2014, Mrs Kazimiera (Kaesy) Mykytiuk of Edmonton passed away peacefully at the age of 72.

Kaesy was born in Lubaczow, Poland in 1942 and came to Edmonton in 1962 where she met her husband Walter and raised her family. The family wishes to thank the staff at St. Michael's Nursing Home for their kindness and caring.