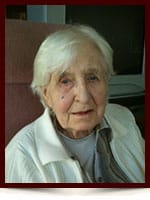 Those of you who knew Leona well, will know she was fond of four letter words... Her favorite four letter word was work. In 1942, as a young 16 year old girl in Fort Smith N.W.T., she worked alongside her mother washing and ironing uniforms for some 200 U.S. soldiers stationed there. Later, in 1965 at Field B.C., Leona and her husband Ted were in a tragic car accident. Ted was killed and Leona was left to work through incredible physical and emotional pain as she was now alone and raising six children. The family moved to Calgary where Leona worked until she was sixty-five as a waitress and later as a hostess. Although Leona was known for always being busy cooking, baking, cleaning, her appearance was always impeccable. It seems the only thing Leona didn't have to work at was looking good. When Leona wasn't at work, she was busy keeping her house and all our house's spotless. Leona's son-in-law, Doug, loved her visits because she was the only person who ever ironed his underwear! On a sadder note, Leona was forced to work through the incredible sorrow of losing two of her three sons, while still in their prime. "Children shouldn't die before their parent." she would say. Even after Leona was forced to retire at sixty-five, she kept working as a volunteer at the Bissell Centre in Calgary. Finally, After a long and often challenging life, Leona spent her twilight years at the Michener Extendicare in Red Deer. She enjoyed spending time with her care workers whom she often thought were her coworkers from days gone by. She particularly enjoyed laundry day on unit 1300.  Dementia ravaged Leona's mind, all her memories were now foggy, but her gnarled arthritic hands still remembered "work" as she contently folded clothes with acute precision. Leona always worked the 7 to 3 shift but she could never get away until 3:30. True to form, on January 11, 2015, Leona finished her last shifted and clocked out at 3:30. Go rest high on that mountain , Mom, your work on earth is through.