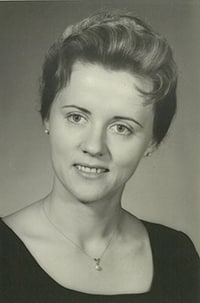 Doris was born in Provost, Alberta on April 14th 1934 to Ole and Lizzie Hanson, pioneering farmers in the Cadogan area. Family was very important to Doris throughout her lifetime, and she cherished the close connections formed in those early days with both immediate and extended family throughout the Provost area. She went on to study art and design at the Provincial Institute of Technology and Art in Calgary, graduating in 1957. She subsequently worked at several health facilities focusing on occupational therapy using creative projects to aid in the rehabilitation and recreation of patients.

Service will be held in Edmonton, Alberta at Holy Spirit Lutheran Church, 11245 51 Ave NW, on Saturday June 15th 2019 at 11:00 a.m. Interment at the Cadogan Lutheran Cemetery will follow at a later date, where she will join her beloved sister Doreen.

In lieu of flowers, the family requests donations to the Glenrose Rehabilitation Hospital Foundation, where Doris worked for nineteen years.