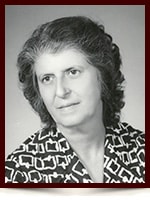 On December 4, 2014 Mrs. Maria Fernanda Borges of Edmonton passed away at the age of 94 years.

She was predeceased by her husband Joao, her son Victor, grandson John Camara, daughter-in-laws Matilde and Conceicao and her son-in-law Manuel Dinarte.