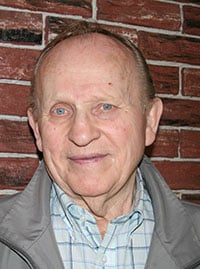 It is with great sadness and broken hearts that the family of Richard (Rick) Teske of Edmonton announces the passing of their beloved husband, father, grandfather, brother-in-law and uncle on December 17th, 2019. Surrounded by his loving family, Rick lost his long battle to diabetes and heart disease but was ready to be pain free with our Lord and Savior.

He is survived by his loving wife of over 60 years: Irma, his five children: Ron (Margaret), Doris, Darlene, Jane (Stephen) and Brian (Katja), his grandchildren Aaron, Brandon, Ashley (Roger), Paulina, Konstantin, Anna, Stefan and Erik as well as his in-laws, whom he always regarded as his brothers and sisters: Lily Teske, Herbert (Helen) Tischer, Richard (Evelyn) Tischer and Harry (Alma) Tischer and numerous relatives, many dear friend through work and the contacts while being a life-time member of the Victoria Soccer Club.

He is pre-deceased by those he called his family that immigrated with him from Germany whom, in his final months, he greatly missed: parents Rudolf and Amanda, brother Eugen, cousin Edward and best friend Emil Wendland. Also pre-deceased: his in-laws Richard and Ella Tischer, his brother-in-law Eric (Barb) Tischer and son-in-law Kevin Penman.

Rick was a proud and passionate business owner who finally retired in May of 2018 at the age of 82. He loved all sports but closest to his heart was soccer. Most notably the Victoria women’s teams of which he served as an ambassador across Canada for over a decal. He was always a generous host and welcomed wholeheartedly an abundance of friends and family to his other passions; that of good food and fellowship.

The family would like to extend a sincere thank-you to Dr. Peters & Nurse Judy of the Justik Clinic, Dr. Gulamhusein and Nurses Rhonda and Sue of the Grey Nuns Heart Clinic, Dr. Villeneuve and his team of the Grey Nuns Kidney Clinic as well as the many other doctors and nurses at the Grey Nuns Hospital over the years. A special expression of gratitude to Chaplain Blaine Allan and Nurse Kim of the Grey Nuns ICC unit, who not only cared for Rick in his final hours but also provided gentle and loving support to his family in the hours of their final farewell.

He leaves behind a legacy and will be greatly missed by many.