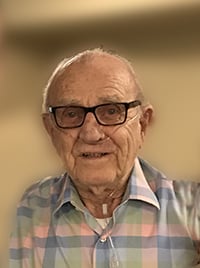 Ben was born April 26, 1933 in New Westminster, BC to Arthur and Charlotte Hughes (nee Keddie). The eldest of 4 children, Ben spent his early years in BC and Calgary, settling in Lethbridge in 1944. Ben married Margaret Angela (Peggie) Brown on April 11, 1963.

Over the next 56 years they lived in Calgary, Raymond, Didsbury and Edmonton. The years he spent in Raymond held a special place in his heart. It was there he raised his daughters and enjoyed a career with Canadian Western Natural Gas, retiring in 1995.

Throughout his life, Ben enjoyed any activity involving his family. He was very involved in thoroughbred horse racing and loved any sport or event that his children or grandchildren were participating in. Ben was the highlight of any get together. He will be remembered for his story telling, quick wit and unique euphemisms. He was a family man through and through and his greatest pride was his daughters and grandchildren.

Ben was predeceased by his daughter Shona; infant son, Robert; as well as his parents. He is survived by his wife of 56 years, Peggie; his daughters, Sheina Hughes (Morgan Neff) and Pamela Heggie (Rod Heggie); his favourite granddaughter, Bailey Heggie and his favourite grandson, Peyton Heggie; his siblings, Doreen Gyorkos, Garth Hughes and Charlene Laing; and their families including his extended family of nieces, nephews, grand nieces, grand nephews and friends. He especially enjoyed the lifelong friendship of Spud Kitigawa.

His family is grateful for the care he received from Drs. Ahmadinejad and Flook and the staff of 5F2, University of Alberta Hospital, for his care during his brief hospitalization prior to his death. There will be no funeral at Ben's request.

Cremation and arrangements in care of Trinity Funeral Home. In lieu of flowers, please donate to the charity of your choice.