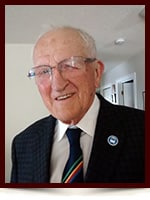 “…the Lord has led me in pleasant places and allowed me to accomplish many things.”

A Pioneer of Light Rail Transit and Preserver of Transit History, Bob is survived by his wife Nora of 61 years, children Andrew (Heather), Russell (Shanan), Jocelyn (Frank Brunton) and Cameron (Natasha); 15 Grandchildren, and 12 Great Grandchildren. He was predeceased by his oldest son Stephen (Signe) in 1992.

Bob was a leader in many things, but of greatest significance was his salvation through his Lord Jesus Christ, which established the faith trajectory for his family. In Edmonton, Bob was part of the managing team for the introduction of LRT. He founded the Edmonton Radial Railway Society, and the High-Level Bridge Street Car. He was the first Operations Director for Sky Train in Vancouver, and was a founding member of historic societies in Glasgow, Delson QC, and Nelson B.C.

“For I know the plans I have for you,” declares the Lord, “plans to prosper you and not to harm you, plans to give you hope and a future.” Jeremiah 29:11

In lieu of flowers, donations can be made to Gideon Memorial Bible Fund.