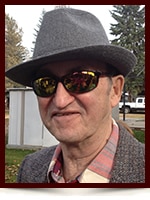 Lloyd was born in Meadow Lake, Saskatchewan on September 20th, 1940. He joined the army and travelled extensively as a signal corpsman. Afterward, he married and got a job as a mail carrier in Vancouver, BC, where his two children were born. Later, he moved to Barrhead, AB, and, then, to Edmonton where he studied power engineering at NAIT. He worked at the Edmonton International Airport until retirement.

He is remembered for his sense of humour, caring heart, and independent spirit by all who knew him.  His favorite pastimes were reading books, listening to gospel music, and enjoying the company of friends and family.

He was predeceased by his parents William Columbus, Martilda Huckabay, and by his brother Gerald Allan.

Donations in tribute may be made to the Edmonton Food Bank.