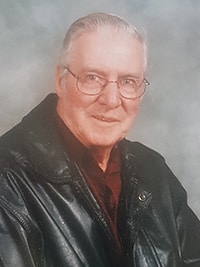 It is with great sadness that we say goodbye our beloved Adrien Sylva Joseph Cyr, who passed away peacefully and surrounded by his family on November 30, 2018 in Edmonton, Alberta.

Adrien was born September 20, 1936 in Souris Valley, Sask., where he lived until his family moved to Radville, Sask. From there he joined the Army and started his own journey.  He traveled Europe with the Queens Own Rifle #2 Battalion regiment and when he retired from the military it lead him to Thompson, Manitoba where he met his love of his life Cecille Cyr and they had 2 children Michael and Michelle.  From there they moved to Sparwood, B.C. where he worked at the local mine then retired and moved to Calgary, Dauphin, Ashville and his final home in Edmonton close to his son, grandchildren and daughter.