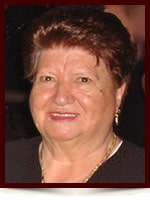 Gone is the laughter and there is no longer a comforting shoulder upon which to lay our troubles. After a beautiful life of love and service to God and to her family, Antonia passed away peacefully on January 16, 2015 at the age of 80 years.

She was predeceased by her parents Enrico and Elvira, brothers: Gustavo and Olindo and brothers-in-law Albino and Giancarlo.

The family would like to extend a sincere thank you to all the doctors and nurses who cared for Antonia during her illness over the last year.