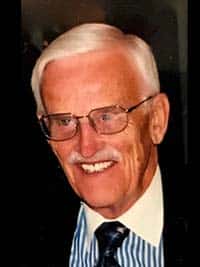 Cliff Downey, of Edmonton, Alberta, passed away peacefully on Thursday, May 3, 2018, at the University of Alberta Hospital with his wife by his side.

He was born in Castor, Alberta, to William and Annie Downey.

Cliff will be greatly missed by his wife and best friend of 46 years, Frances, and his children: William (Darina), Dwight (Kathy), Michele Labonte, Darrin, Reena, Cheryl Labonte, Bruce (Heide), Elisabeth Hughes (Steve), 16 grandchildren and 10 great-grandchildren. He will also be missed by his daughter-in-law Trudy Nylin (Wayne).

Cliff was a devoted husband and father. He was passionate about agriculture and service to his community. He was a farmer, Member of Parliament, Farmers’ Advocate of Alberta, and a member of the Alberta Surface Rights Board. Cliff moved to Edmonton in 1982 but remained deeply rooted to his farm in Castor, making routine trips back home to see the land, check on the crops, hear the farm sounds, and stay connected to his friends and neighbours.

His smile was his trademark as much as the fact that he was a man of his word. He will be remembered fondly by all those who had the pleasure of knowing him, and his absence will be felt profoundly by his family and friends.

A funeral service will be held at Riverbend United Church, 14907 45th Ave, in Edmonton on Wednesday, May 16, at 1 p.m.
Interment of ashes on May 24 at the Castor Cemetery at 2 p.m. Open to all who wish to attend.

In lieu of flowers, donations can be made to the Salvation Army or the Hope Mission or a charity of one’s choice.