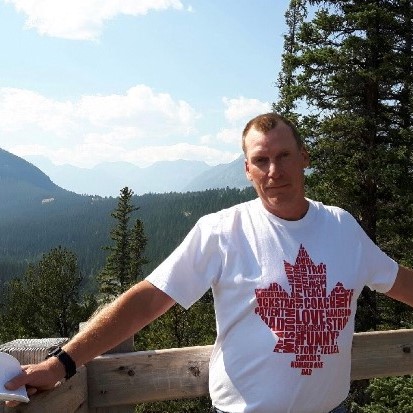 It is with heavy hearts that the family of Darren Vilhelm Jensen announce his passing on September 20, 2020 at the age of 52. After courageously battling brain cancer and thanks to Darren’s stubbornness, we witnessed him defy the odds on numerous occasions right up until the end, when he peacefully passed away at home surrounded by his loved ones.

Although Darren was always a believer, his relationship had drifted away from God in recent years. Shortly before his passing he accepted his mortality. He reached out to God and declared Jesus Christ as his Lord and Saviour.

Darren was an amazing father to his daughter, the love of his life, Brittany (aka Pumpkin). He had a huge passion for hockey, in particular the Edmonton Oilers. His sense of humor was second to none, he could find humor in most situations to lighten the mood and make hard times more bearable, even if he was a bit grumpy at times, it was part of his charm. He lived a simple life and took incredible pride in his work and his accomplishments. He was fiercely loyal and always a straight shooter. A true friend.

The Jensen family would like to extend a special thank you to the Angels from Palliative Care Team Pod E and to the wonderful staff at Rite Choice Pharmacy for their amazing support through Darren’s final journey.

This Saturday we will be doing something Darren used to enjoy, we will have a drink around the fire in the backyard and toast a great man who was so loved.

In lieu of flowers, please donate to the Cross Cancer Institute.