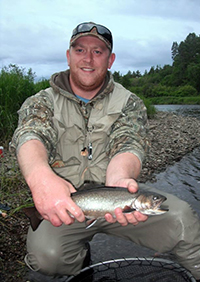 It is with great sadness that the family of David Allan Gaunce announces his sudden passing on Sunday, April 5, 2020 in Grande Prairie, Alberta, at the young age of 39.

He was predeceased by his father Douglas A. Gaunce, grandparents Berton and Lillian Gaunce, Perley and Dorothy Robinson, and cousin Marilee McLean.

David was born in December 1980, and was raised in Fredericton, NB.  As a kid, David played hockey in the local FYHA and had a booming slapshot.  David  was a “lefty” golfer and could easily out play both his brothers.  He also played baseball growing up, David was a natural athlete and had great hand-eye coordination.  His other hobbies also included fishing and hunting.  David got his step-dad Delmer hooked on salmon fishing by helping him land his first big one on the Miramichi! David shared all these hobbies also with his two brothers, Andrew and Sean, and his father Doug.

David graduated from FHS in 1998 and remained in the Fredericton area until he graduated from Holland College’s Fire Fighting program in 2006.  It was this career that led David to pursue a job offer in Grande Prairie, Alberta.  Once established in Grande Prairie, David met Ashley Folwark, and together they welcomed Adelyn (Addy) into their lives in August, 2012.  Addy became as David put it “ she is the light of my life “.  Addy kept David busy these last 7 years  making fun memories  together, such as puzzles, board games, learning to skate, and bike riding.  David was most proud of Adelyn for how well she did in gymnastics and cheer.  David would update his family back in NB about Adelyn, his voice  beaming with excitement when he spoke of her.  One of David and Addy’s favourite things  would be to go to Dairy Queen for blizzards.  One of the last memorable moments David had with Addy, was in December, when together they spent the weekend in Edmonton to watch his lifetime favourite team the Toronto Maple Leafs play the Edmonton Oilers.

David had a huge heart and a gentle way.  He always brought a smile to the room with his easy going personality.  He loved his visits home to NB, his mom’s home cooking and hanging out with all of his nieces and nephews.  He was definitely the “cool uncle”!

At this time, due to the current health recommendations pertaining to large gatherings, a celebration of life will take place at a later date.

For those who wish, donations can be made in David’s memory to the Alzheimer Society of New Brunswick.