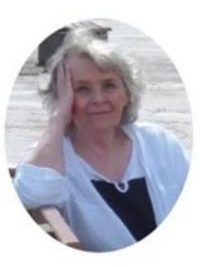 It is with great sadness that we announce the passing of Gloria Dent, of Edmonton, Alberta. Gloria passed away peacefully, on August 31, 2020, after a brief but courageous battle with cancer.

Gloria was born in Westlock, Alberta, and moved to Edmonton when she was 10 years old where she spent the rest of her life. In her younger adult years she loved spending time at their cabin out at the lake with family and friends. She loved music and sang in a small band with her brother Kerry, and friend Gary, where they entertained in small Hotels surrounding Edmonton. Later in life Gloria loved staying at home with John, where she had a small accounting business. Gloria will always be remembered for accepting life as it was with her positive ways and was always there for her 2 children, her family & friends.

Her family would like to sincerely thank the staff, who took such great care of her in her final days, at Sturgeon Community Hospital and Foyer Lacombe Covenant Care in St. Albert

As per Gloria's request there will be No Service.

She will be greatly missed, always loved and never forgotten.