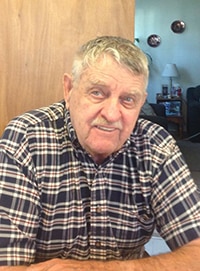 It is with great sadness that we announce the passing of a loving husband, father, brother, uncle, grandpa, and great grandpa.

Born in Namaka Gordon farmed much of his early life in southern Alberta. He moved in 1959 with his wife and daughters to California USA. where he was a welder, mechanic and drill rig operator, and returned in 2013 to Edmonton to be with his daughters.

Gordon was a fun loving guy who enjoyed camping, fishing, boating and sports, especially hockey. His favorite team was the Anaheim Ducks. He had a great sense of humour, was a hard working man. devoted to his family and friends. He will be deeply missed by all those whose life he touched in the last 91 years.

Rest in peace Dad we love you.

A Celebration of Gordon's Life will be held at a later date.