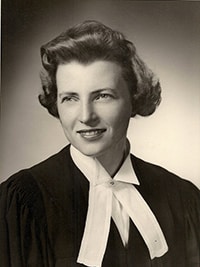 Terriss, Gwendylyne Louise, age 89, of St. Albert, Alberta, passed away October 2, 2018, in Edmonton, Alberta. A much loved mother, grandmother and great-grandmother, Gwen was born on January 10, 1929, in Toronto, Ontario.

Gwen grew up in Albert, New Brunswick, and went to St. Francis Xavier University, Antigonish, N.S., graduating in 1949, with a Bachelor of Science degree. She became a Certified Medical Technologist in 1950, at the St. John General Hospital. While in St. John, Gwen met her future husband, Joseph Terriss, and they married November 6, 1950.

In 1958, Gwen graduated from the Faculty of Law, University of New Brunswick and practiced in Kitchener and Ottawa, Ontario. After five years practicing law, Gwen decided to embark on a new career. She attended Dalhousie Dental School, Halifax, N.S., graduating in 1967. In 1970, Gwen completed a Master of Science degree at the University of Rochester, Rochester, N.Y., with a Certificate in Paedodontics from the Eastman Dental Center, 1969, Rochester, N. Y.

Gwen had a passion for organic farming beginning in the 1980s, which she pursued at her farm in the Annapolis Valley, N.S. Gwen also loved skiing and in her later years, would enjoy cross-country skiing.

The family is grateful for the compassionate care Gwen received while at the Edmonton General Continuing Care, Edmonton, Alberta, and would like to thank all the caring staff of 9y who so lovingly attended her.

Gwen’s presence was a gift to all who knew her, and she was a force that will be greatly missed.

In lieu of flowers, donations may be made in her memory, to the Girl Guides of Canada.