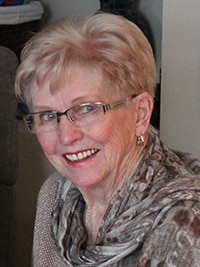 Our beloved Joan passed away on Friday, August 3rd, 2018.
Her final days were spent at Norwood Hospice, surrounded by family.

Joan is survived by all of her siblings, Keith (Margaret) Booth, Helen Heller, Barry (Carol) Booth and her numerous nieces and nephews and lifelong friends.
Joan was lovingly cared for at home by her daughters for the last 9 months of her life. That experience birthed a new relationship with their mother and each other.

In Joan`s own words, “I had a fantastic life!”

Joan pursued many passions; golf, curling, bridge, gardening and cooking to name just a few. Joan was a renowned hostess who happily entertained large groups of family and friends throughout her life. She was also an 85 year old computer whiz and bookkeeper extraordinaire up until the last few months of her life.

To honour Joan, you could plan a special meal to share with your family or friends.

In lieu of flowers, memorial contributions may be made to either The Canadian Red Cross or the Hope (Edmonton) Mission.