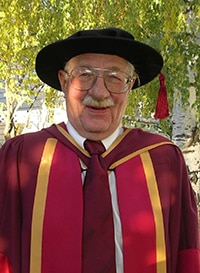 John was born in Reading England September 27, 1929, however, he spent his formative years in Aylesbury, Bucks.

After doing his national service he obtained his BSc and PhD from the University of London. In 1957 he joined the Botany Department at the U of A where, for next 30 odd years he pursued his interest in the taxonomy of Arctic and alpine plants.

He leaves as his legacy many papers relating to this topic, a number of graduate students scattered about the world, and the 3rd edition of the Flora of Alberta.

John was interested in human rights as well as progressive politics, and was a long time member of the New Democratic Party, having run as a candidate in 1972.

He is survived by his wife Anne, sons Keir (Judy), Tom (Bette), and Jim, as well as grandchildren Valerie, Stephen, Clare and Seth. He is also survived by his brother David (Pam), and nephews Simon and Duncan and their children, Sam, Ella and Seth all of England. He was predeceased by his daughter Naomi.