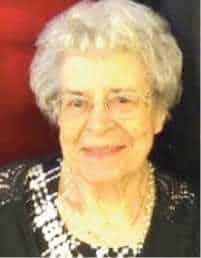 It is with deep sorrow and sadness that we announce the peaceful passing of our loving mother, grandmother and great grandmother Mary Kowalski at age 95 on Wednesday, March 6, 2019. Mary was born on July 31, 1923, in Annushin, Poland, and arrived in Canada on June 27, 1930, with her father Stanislaw Chachula, mother Marianna, brother Stanley, and sisters Julia, Jenny and Josefa. The family settled on an isolated piece of land between LaCorey and Iron River. Mary was the last living person of the family that came to Canada in 1930.

Her husband Paul Kowalski passed away in Bonnyville in 2008.

She was the great grandmother of eleven and leaves to mourn many nieces, nephews other family and friends in both Canada and the USA. Education was a key component of her motherhood and her children will forever be thankful for the love and stewardship that she provided. She was a determined woman who found many happy hours with her knitting, ceramics and bridge. She had a tremendous sense of humour.

A prayer and memorial service will be held in Bonnyville midsummer and internment will take place in Beaver Hill Cemetery at that time. Donations to the Alberta Diabetes Foundation will be gratefully accepted. (Trinity Funeral Home, Edmonton, is in charge of arrangements, 780-474-4663).