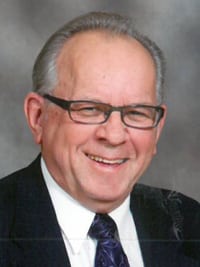 It is with great sadness and heavy hearts that we announce the passing of our beloved father Nestor Kosowan at the age of 77 in Edmonton, Alberta.

Born in Gardenton, Manitoba (in the municipality of Stuartburn), Nestor was the loving and devoted husband of Leona (nee Yurkiw) and married for 31 years at the time of her passing in 1998. Nestor is survived by and was an amazing Dad to daughter Angela and son Leonard (Selina) as well as a loving grandfather to his grandsons Alex, Jaxon, Spencer and Evan.

Nestor came from a wonderful family of twelve and is also survived by sister Helen and brothers Michael (Henrietta), Jarvis (Eila) and Lawrence (Barbara) as well as sisters in law Elsie (Bill), Marlene (Nick) and Diane (John).

The family wish to express their most sincere and heartfelt gratitude to the medical, nursing and care support team at Jubilee Lodge Nursing Home for their caring, compassionate and professional care.

In lieu of flowers, donations can be made in Nestor’s name to the Jubilee Lodge Nursing Home in Edmonton.

Due to the COVID-19 pandemic, a small graveside service will be held on
Monday July 20th at 1.00pm at St Michael’s Cemetery situated at 13819 – 82 street NW, Edmonton Alberta.