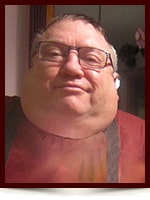 Nestor Krisco passed away suddenly, on December 19, 2015, in St. Albert, AB.
He was born in Luscar, Alberta in 1949. He worked for Canada Post for 30 years and enjoyed travelling, camping and looking after his birds.

He is survived by his loving wife of 40 years, Lucy (nee Skikiewich), brother Robert (Alvina) and numerous aunts, uncles, nieces, nephews and cousins.

He was predeceased by his parents Paul and Emma Krisco.