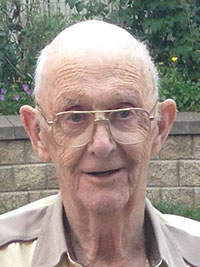 It is with great sadness that the family of Robert “Bob” Fairfull announces his passing on Sunday, November 24, 2019 after a brief illness, at the age of 91 years.

Robert Fairfull was born March 20, 1928, in Edmonton, Alberta. Although Bob was born in Canada, he was raised by his Scottish parents in Edinburgh and maintained close ties to Scotland for the rest of his life.

Bob dedicated 44 years to public service, serving in the Royal Air Force, Royal Canadian Air Force, and Canadian Armed Forces. His time in the military took him from Scotland, to Singapore, to France, and finally back to Canada.

Always active, Bob loved playing soccer and going swimming. Golf was his favourite hobby and he continued to play for as long as his health allowed.

Bob requested that a portion of his ashes be spread in his cherished Scotland, at St. Andrews Old Course. Marie and Bob will be laid to rest together at Holy Cross Cemetery in Edmonton, Alberta.

Memorial Donations may be made to the Heart and Stroke Foundation 5241 Calgary Trail NW. Edmonton, AB. T6H 5G8