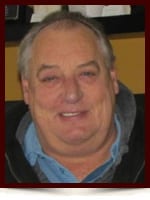 It is with great sadness that we announce the sudden passing of Terry Thomson on January 4, 2012 at the age of 62 years.