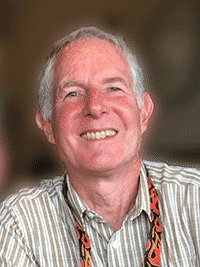 Our dear Tom has passed away on December 21 as a result of pancreatic cancer. Tom is survived by his beloved wife Lorna, his step children Anthea Dacruz-Smith and Ian Smith, daughters-in-law Maria and Jacqueline, his grandchildren Jacob, Rio, Evie and Egan, his sister and brother-in-law Margaret and Bryan Parlor in Ottawa along with their children William, Laura and David, and his sister Janet in Vancouver.

Tom was born in Oakland, California. His parents William H. Mathews and Laura Lu Tolsted met in Berkeley when they were both pursuing graduate studies in geology. Tom moved to his father’s hometown of Vancouver when he was several months old. He graduated from UBC, then moved to Toronto to work, then moved to Edmonton when he married Lorna in 2006.

Tom was a unique and wonderful man. A prodigy in mathematics and science, Tom enjoyed his career as a computer programmer and was involved with climate research and stratospheric ozone research. Tom amazed us with his knowledge of history, geography, and current events. He remembered his life in detail and loved to tell stories. For 26 years Tom ran marathons with a personal best of 2:37:25. He participated in the cross-Okanagan Lake swim as recently as this summer. As a family man in his later years, Tom was loving, loyal and conscientious. He was the patriarch.

Tom received excellent and compassionate care at home from the palliative care team and the family is so grateful.

***Due to the coronavirus public health risk, we regret to advise the Memorial Service has been postponed until further notice. We will announce when a new date is determined***