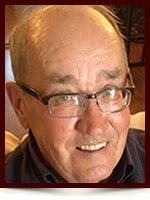 It is with a heavy heart that we announce the sudden passing of Tony Prokopiuk on June 19, 2016. Tony is survived by his wife Shirley, daughters Sabrina, Krystal (Dave) and Nicole (Michael); grand sons Kyan, Kaiden, Connor and Jacob; brothers and sisters Sonya, Helen, Fred (Mary), Peter and Shirley (Wayne) and numerous nieces and nephews. Tony was predeceased by parents Paul and Mary, sisters Vera, Olga, Lula, Nettie and brother Walter.

Tony's was a life well lived! He was a kind, generous soul who enjoyed socializing with family and friends, volunteering with Special Olympics and the many years spent chauffeuring his girls around to numerous activities. He retired from Manitoba Pool Elevators in 1998. Life became far more adventurous with the birth of his grand sons, all whom he treasured and loved dearly.