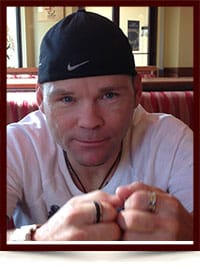 The passing of William "Billy" Ray Waite occurred on Wednesday, August 03, 2016 in Edmonton, AB. Born on October 29, 1971 in Fredericton, NB, he was the son of Sylvia Soutar, Jerry Lyons and biological father, Warren Waite. Billy was a carpenter and enjoyed working on cars.

Visitation will take place at York Funeral Home, 302 Brookside Drive on Saturday, August 13, 2016 from 2 pm to 3 pm, with a Memorial Service to take place immediately following at 3 pm in York Funeral Home's T. Gordon MacLeod Memorial Chapel with Rev. Paul Thompson officiating. For those who wish, remembrances may be made to the Heart and Stroke Foundation of New Brunswick or the Canadian Diabetes Association. Personal Condolences may be offered through www.yorkfh.com